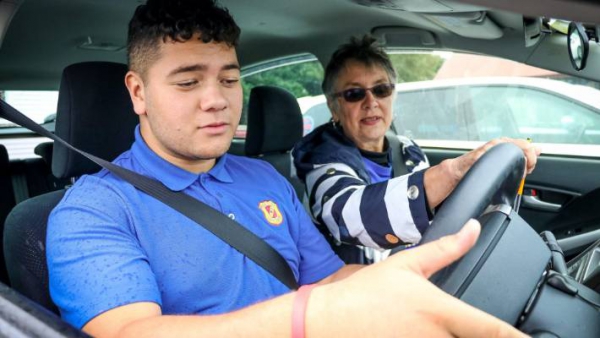 Mayors Taskforce for Jobs (MTFJ) holds the position that the existing graduated driver licensing system (GDLS) does not serve young people well. Successfully navigating the GDLS requires an intensive level of support, mentoring and resources that many of our young people are unable to draw upon. Young people who do not successfully obtain a driver’s license are often unable to participate in the economy (particularly in rural and provincial areas), and are at an increased risk of entering the criminal justice system via a licensing infringement.

The demand for driver training and education support has led to the proliferation of programmes and initiatives across New Zealand. There is no data on the exact number of programmes currently running across New Zealand. These programmes vary in scale and level of service, and are exposed to a variety of risks; funding shortfalls, resource constraints and staff/volunteer burnout. The barriers to getting through the GDLS a product of various centralised policies, but the effects are being felt (and addressed) locally.

Failure to address the issues with the GDLS will result in continued marginalisation of vulnerable young people as well as increased pressure on the economy and criminal justice system. In absence of a reform of the GDLS and appropriate local support, communities will be left to take on an “ambulance at the bottom of the cliff approach”. What MTFJ wishes to see is the development of a “fence at the top of the cliff approach.”

In May 2016 MTFJ, Massey University and Connecting for Youth Employment partnered to launch the Steering Aotearoa initiative in Central Hawkes Bay.

MTFJ had identified that one of the biggest barriers to employment for young people was the lack of a driver’s licence. The barriers are particularly acute in rural & provincial communities and those with high deprivation. Youth may lack access to a car, be unable to afford lessons or travel to a testing centre.

The initiative aimed to respond to demonstrate a way to overcome these barriers by providing youth the opportunity to gain their license while  at school. The pilot was overseen by Massey Universities Dr Peter Rawlins, and was made possible by the efforts of Connecting for Youth Employment's Kelly Annand.

As a result of the pilot 20 kids from diverse backgrounds are well on their way to having their full licences. The research report recommended that driver training programmes be retained, and expanded, to provide opportunities for all students to secure their full driving licence before they leave high school.

Drawing on the research, Mayor Steve Chadwick of Rotorua moved a remit at the 2017 LGNZ AGM that the membership of LGNZ advocate with them for the implementation of a universal, free & all accessible drivers licensing programme in New Zealand schools.

This remit was passed with overwhelming support.

The full report can be read here.

Prior to the 2017 General Election, Labour and NZ First recognised the importance of driver training for young people. Labour went as far as to include this as part of the "School Leavers Toolkit.

You can read more about the toolkit here and here.

Following the general election MTFJ have been working closely with various ministries on their approach to a driver licensing programme.

Ensuring a successful programme is delivered that works for young New Zealanders is the number one priority of MTFJ. We are determined to see the knowledge and experience of local driver programmes and their staff captured and utilised.

We will be sharing updates with our members as soon as we can - stay tuned to find out more.

How can we improve this site?